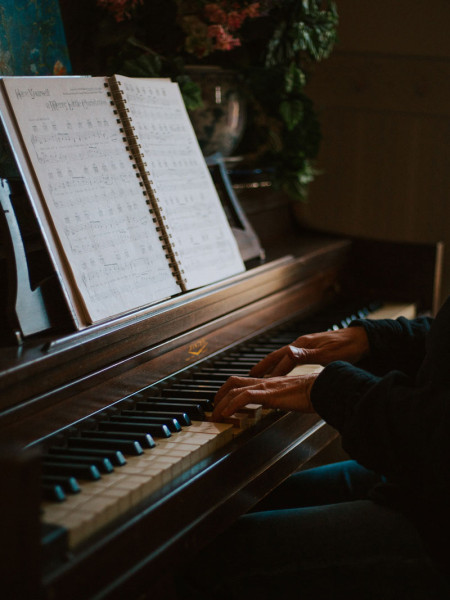 Ready to learn
the Piano?

Welcome to the Piano

The piano (or pianoforte) is played all over the world and requires a great deal of coordination by the player. There are various sizes and shapes of piano with the most common being the 'upright' and the grand (pictured).

As the pianist plays the keys, a hammer mechanism strikes the strings inside the piano with a felt hammer causing them to vibrate thus producing the sound.

There have been many virtuosi players over the years and composers have written extensively for the instrument. In the classical era, Mozart wrote 27 concerti for piano as well as numerous solo works. With composers including Liszt, Paganini and Chopin writing countless works the piano soon became one of the most written for instruments.

In recent years the composer Einaudi has been taking the world by storm. This is a performance of his 'Berlin Song' performed at the Royal Albert Hall.

Here is a video featuring some boogie woogie!

Who can play the piano?

Anyone can play the piano at any age however most children start at about Year 3.

If it is not suitable for everyone, what alternative instrument would you recommend and why?

Sometimes children begin on an electric keyboard to see if they like the piano – these are obviously smaller and also cheaper than a piano! However this keyboard must be touch sensitive to mimic the piano touch.

What qualities of the piano are special?

The sound of the piano is unique – everyone recognises it. It can be used as a solo instrument as well as accompanying other instruments and voices.

Learning to play any instrument develops lots of new skills.  What are the particular benefits of playing the piano?

Benefits of learning the piano include developing good knowledge of both treble and bass clef – this is especially useful if you have begun piano and are thinking of taking up another instrument as well.  Also good piano skills are essential for any sort of career in music.

Are all pianos the same?

There are usually two sorts of piano - upright and grand. Upright pianos are most commonly seen – most schools have one.  Grand pianos are often for big performances with orchestras or recitals for example.  They are also usually much more expensive!

If you are thinking of buying a piano then please seek advice from any Musica Kirklees piano teacher before purchasing.  Things such as tuning and general condition can vary hugely between instruments.

Are there any famous musicians or pieces associated with the piano?

Have a listen to Clair De Lune by Debussy for the piano sounding very beautiful or anything played by Jools Holland for a big band jazz sound!